#NHS IN CRISIS. Use your #GE2017 vote to save & re-build our health service #RegisterToVote

If the Conservatives win on June 8th there will be no NHS as we know it.

Since 2010 they have starved our health service of funds, split it up into competing organisations and encouraged private corporations to run it for their own profit, as in the USA. Dedicated NHS staff are desperately trying to keep patients safe but the cracks are now splitting open – it is now up to YOU to act and vote against this Conservative government.

Theresa May denies there’s a crisis and repeats broken promises. But the facts and your own experiences tell the real story:

Why do we say another Conservative government will finish off the NHS? Look at what they say and what has happened since 2010:

You may be someone who doesn’t vote, or feels nothing will help, or someone who has always voted Conservative. But this time, now, June 8th, think what is most important to you, and …

… Use your vote to save and re-build our health service

Register to vote at https://www.gov.uk/register-to-vote (by 22nd May) 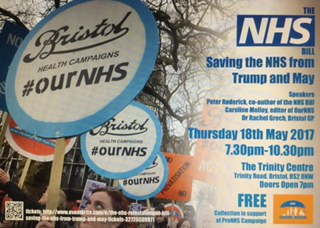 Media release – Bristol: Why the next parliament must introduce a new law to save the NHS https://www.eventbrite.co.uk/e/the-nhs-reinstatement-bill-saving-the-nhs-from-trump-and-may-tickets-32725539971 »
« A call to #Bristol #NHS health workers – Do you know about & support the NHS Reinstatement Bill? #GE2017

4 thoughts on “#NHS IN CRISIS. Use your #GE2017 vote to save & re-build our health service #RegisterToVote”

Protect our NHS Meetings are held on the 1st and 3rd Tuesdays each month at 7.15pm. In these Covid-19 times these are being held via Zoom